Please be on the lookout for skull boats on the Mystic River around the MBTA bridge. There is poor visibility for the teams as they come around the corner. We ask all members stay in the channel by going around the blue floats in front of Mystic Wellington. Please avoid using the center of the river by Winter Hill Yacht Club. The center of the river will be used by the CREW teams. You can view the map of the channel in the below link.
Mystic River Map

Welcome to the Riverside Yacht Club

Medford’s Riverside Ave was once home to a number of ship yards which built 568 sailing ships in Medford. Timber was brought down to Medford via the Middlesex canal to the Medford ship yards. Ships were launched into the Mystic River on the banks where Riverside Yacht Club currently stands today. At one point one fourth of all ships were built in Medford until Iron steam ships were favored over wooden ships.

Let’s kick of the 2022 season with a smash of a party. RSVP your spot today. Come join the party at RYC. Ladies are encouraged to bring their derby hats for the hat contest.
Full Forecast
Fishing Regulation
Tidal Charts 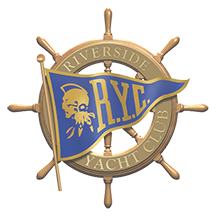